The serverless components of the Entity Resolution Application are described in another post. For more detail the subject of Entity Resolution, I wrote this primer for my NYU class. For the specific implementation, the methodology is described below.

The model is based on Norvig's spelling corrector. The general equation, using Bayes Theorem to disambiguate sub-problems: $$\{c|P(c|\epsilon)>\theta\}\longrightarrow \{c|P(\epsilon|c)P(c)>\theta\}$$

There are four parts:

The algorithm does basic treatment to the two input words (lower case, removing punctuation and words like inc, corp, etc. Then the model described above is applied to calculate the probabilty of the match. Entity Resolution is a complex, deep topic. This application barely scratches the surface.

This model uses lookups rather than direct matching, which allows for the circumstance that a company name may have different letters or words, but still refer to the same entity, like Meta Platforms and Facebook.

A lookup table is constructed of keys that map to a specific company, where the company name is predefined. There is a probability of association between the key and the company, as defined in the next section. When a user inputs two entities, they are (probabilistically) associated with a key and in turn a company name. Thus, there are two major parts of the framework. First, building the look-up table. Second, utilizing the look-up table to identify matches and non-matches.

In this model, a company is represented by a document or a set of documents. To start, I use its Wikipedia page. Alternatively, annual reports, SEC filings, or an aggregation of all of them can be used. Then a key-value store is constructed by:

To determine if two entities match, the illustration below demonstrates the potential cases for matching. Given the complexity, some notation is required. 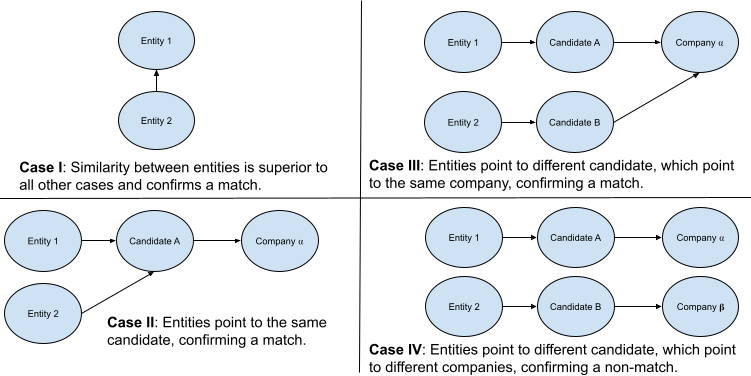